How the Brain Works 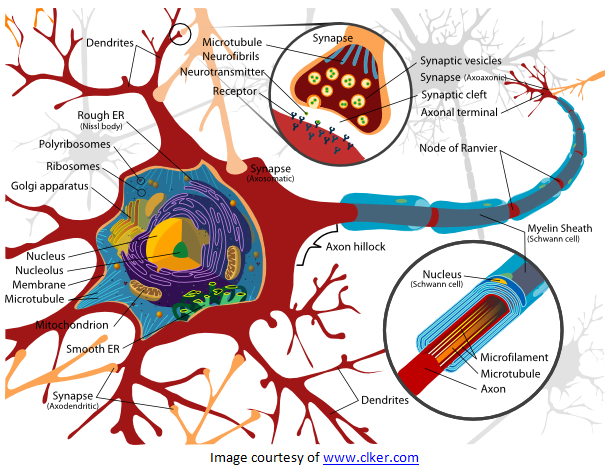 We have learned a lot about the brain in recent years. Researchers continue to learn more about the brain and how it works. Some researchers specialize in finding out how we learn, in hope of improving how we teach.

The brain of a newborn has few connections, but children build connections faster than adults.  The pace slows as they approach puberty. Children are like sponges soaking up everything they see around them. They can learn a new language much faster than most adults can.  They copy things they see other people doing and saying.  Children’s mannerisms are often just like their parents.  A parent’s example is very important as is children’s exposure to the behavior of peers.  Children will copy what they see.

What actually happens in your brain?  The brain contains nerve cells, called neurons.  Each neuron has branches, lots of them, reaching out from the center of the neuron. Dendrites receive messages (or electrical signals) from other neurons.  Impulses are passed along a single longer branch of the neuron, called an axon.

Each axon is coated with a myelin covering which acts both as insulation from other cells and as a sort of grease that speeds the transmission of the electrical impulses.  There are tiny gaps between the neurons which are called synapses.  Neurons do not have direct contact.  A neuron gathers signals from other neurons through the dendrites and sends a signal out along the axon.  In addition, chemicals in the brain either stimulate or inhibit the nearby neurons.

This is a very simplified explanation of a very complex process.  As you begin to learn a new skill, some of the neurons in your brain fire up and sensitize the surrounding neurons.  With repetition of the new skill these neurons become more sensitized.  They begin to group together and fire together, in effect creating a greased path. More repetition causes the neurons on this path to fire even faster.  As you continue to learn and build on the new skill, your brain builds more complex connections. Eventually the skill becomes automatic so that you can do it without really thinking about it much at all.  You have built a new habit.

More about habits and learning next week!